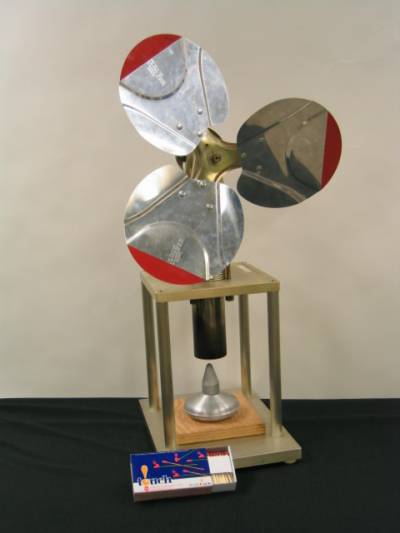 Demonstrate the functionality of a stirling engine and the principles of heat engines. Shows that heat engines can be run in reverse by changing the direction of the thermal gradient.

Alternatively, the engine may be run in reverse by applying the opposite temperature differential.

If the lamp is empty, refill it with ethanol. Do not use lamp oil.

A plexiglass shield was recently made for the bottom of the engine, as in some lecture halls there may be a strong enough breeze to put out the burner.

Placing the burner on a wooden block to bring the flame closer to the cylinder will help the engine heat up faster.

Useful Links: How Stuff Works provides an excellent description of Stirling Engines and some physical concepts behind them: http://auto.howstuffworks.com/stirling-engine.htm American Stirling Company is the place to go if one was interested in purchasing a Stirling Engine that can run using the heat of your monitor! http://www.stirlingengine.com/ For those interested in creating their own Stirling Engine, perhaps Koichi Hirata can help out. http://www.bekkoame.ne.jp/~khirata/