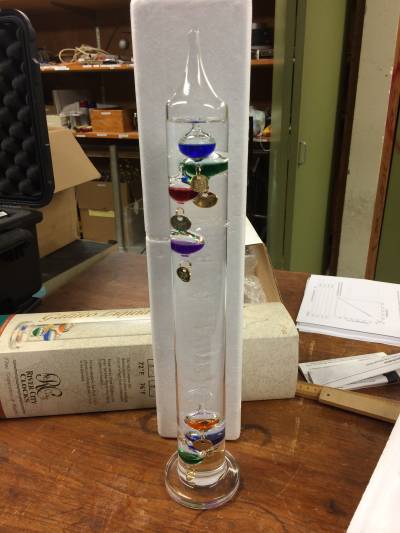 A Galileo thermometer is a thermometer consisting of a sealed cylinder filled with clear liquid and containing several glass floats of varying density.

Demonstrate how the density of liquids can vary with temperature, and how this impacts the force of buoyancy experiences by objects immersed in the liquid.

This particular Galileo thermometer is read by looking at the lowest float that hasn't sunk to the bottom. The readings are unfortunately in Fahrenheit.

Contrary to immediate intuition the differently-colored liquids which half-fill the floats are entirely unrelated to the operation of this thermometer.1) Since the glass has a low coefficient of thermal expansion relative to the surrounding liquid, the density of the floats can be said to be relatively constant. The actual principle of operation of the Galileo thermometer has to do with the liquid the floats are floating in. This liquid (often water, but not necessarily) decreases in density as its temperature increases. The densities of the floats are adjusted with the weights hanging from them such that they sink when the temperature of the liquid matches the temperature indicated.