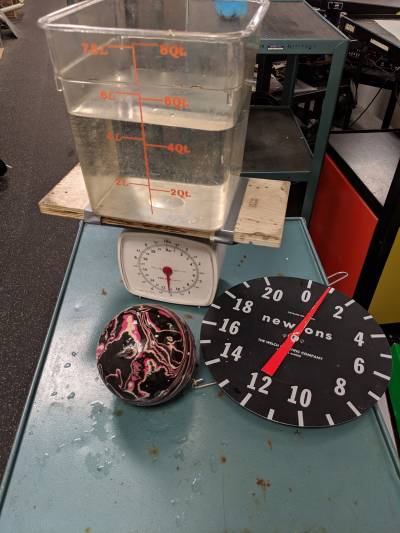 This demonstration can be performed in a few different configurations, but the general setup is the same: A mass suspended on a force scale is lowered into a container of water, which sits on a scale.

Show that the apparent weight of objects is less when they are submerged in water due to the buoyancy force. We can use this setup to provide an illustration of Archimedes principle by comparing the weight of an object to it's apparent weight when suspended in a container of water.

The large container is filled with water, and set aside. When showing this demo you may want to start by weighing the heavy object. Then place the container of water on the scale, taking note of the weight. Lower the weight into the water until it is fully below the water line, but not yet touching the bottom. The value on the force scale will decrease until the ball is fully submerged, and then remain constant while the value on the scale below the tank does the opposite (buoyancy force doesn't vary as a function of depth once the object is fully submerged). Then, set the weight on the bottom of the tank. The force scale will zero out while the scale underneath will increase. (at this point the entire weight of the object is being supported by the tank, either through buoyancy force or normal force.)

It's important to point out that at all times, the sum of the values on the force scale and the scale beneath the water tank are equal.

The pictures show this demo performed with the kitchen scale, but if you have the time setting it up with the Vernier force scale is better. You can change the units of the graph to Newtons so you don't have to convert between kilograms and Newtons on the fly, and watch a graph of how the apparent weight of the container changes with time. 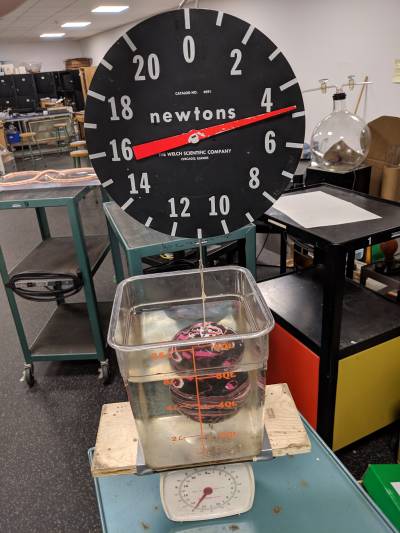