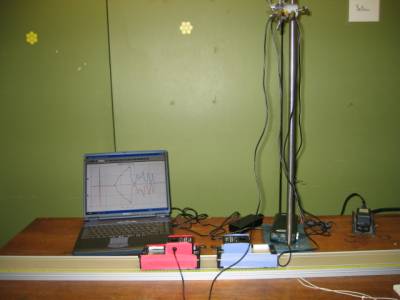 Using a laptop with Logger Pro 3.1 installed set up the demonstration as shown in the photo. Both Channel 1 and Channel 2 are used in this demonstration. Open Logger Pro 3.1 and open a file called “c:\Program Files\Vernier Software\Logger Pro 3\ Experiments\_Physics with Computers\11 Newtons Third Law.xmbl”. Then all one needs to do is “Zero” the sensors, press “Collect” and collide the cars. One can also push the cars together to demonstrate the forces are equal and opposite, since the collision is so quick that all one sees is a spike. A plot similar to that shown on the screen of the laptop should be seen. This can be projected by hooking up the laptop to the LCD projector. Another interesting thing to show is to place a weight behind one of the cars and use one car to push both of them. Effectively, the one car is braking, but both cars will show equal and opposite forces. Updated on: 06/13/13