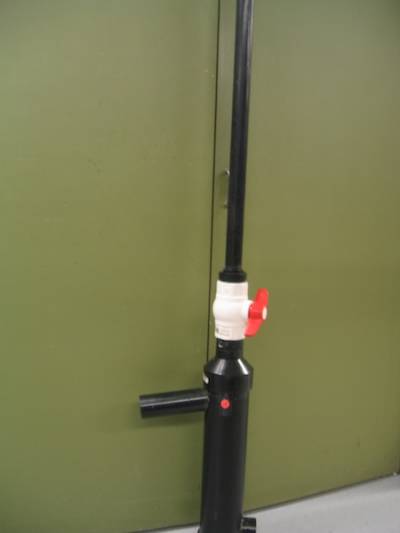 This demo uses an adiabatic expansion of air in order to fire a potato projectile.

there are two guns - one is newer and has a pressure gauge. The new one had a leaky valve which was fixed in 2018.

Gun: 1. Unscrew the barrel of the gun 2. Stuff a potato length ways (so the potato bullet is as long as possible) down the barrel of the gun. Don't do anything to the potato prior to this, the barrel should “core” out exactly the size bullet it needs when you push it down. 3. Push the potato “bullet” down the barrel as far as you can without pushing it into the wider portion of the barrel. (use a broom handle or something similar as a ram rod) 4. Re-attach the barrel to the gun, and make sure the valve is closed 5. Using the bike pump, pressurize the potato gun to ~50psi 6. Attach a lock wrench to the valve handle to get extra torque 7. Aim, and release the value when ready and BOOM. (Try not to miss and dent the wall…..again)

Target (option 1): 1. Find a large cardboard box (They can often be found in the room to the left of Stores) 2. Optional: I like to print out a paper bullseye and lightly tape it to the front of the box opening (see image below) 3. Set the box on a stand.

Target (option 2): 1. There is a catching mechanism located in the mechanics closet on “s” floor (see image below) 2. The mechanism will recoil and lock at the highest point reached on its arc 3. By measuring the height the caching mechanism goes, you can get an estimate for the mussel velocity of the gun 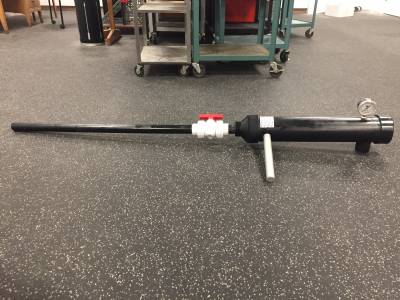