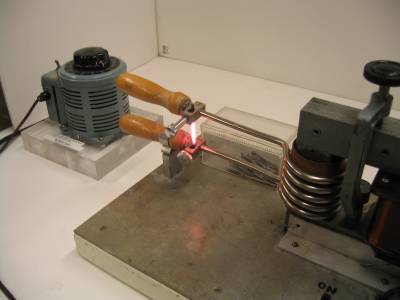 The demonstration consists of a step-down transformer with a fixture to attach a nail in series, mounted on a metal base with a power indicator light and a fuse.

This demonstrates the operation of a step-down transformer in a dramatic manner, by using a transformer to step up the current enough that it'll melt a steel nail via Joule heating. This can also be used to show Wein's law, in conjunction with the Infrared camera.

This apparatus can be plugged directly into the wall, but it is often better to be able to vary the voltage. (In that case, plug the nail burner into the Variac, and the Variac into the wall.) Place the nail in the holder and clamp so that the handles are held together by the nail and the screws. Increase the voltage so that the nail glows. By varying the voltage it is possible to see the nail glow red and then orange. When the nail is bright white-orange it will melt in half, causing the handles to spring apart.

At this point, as a 'bonus' demo, you can use the nail burner to weld the two halves of the nail back together. Simply press them together with the current turned on, and hold them together until the join between them glows bright white-orange. Then, turn off the power and let it cool a little bit before letting go.

Do not use galvanized nails with this demonstration. Zinc fumes are highly toxic, use stainless steel nails for this.