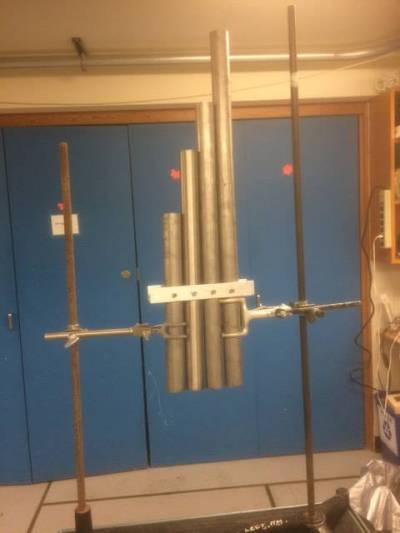 Using a ring stand heat the tube over a candle flame or bunsen burner for a few minutes. When the tube is removed from the flame, a strong tone is heard. The pipes pictured above form a tritone and an octave; individual tubes can be removed from the holder. If a blowtorch is used, it should only be held under the tube for a few seconds since doing so for longer risks melting the copper screen.

The Rijke tube is an interesting example of an open cylinder resonator. Folds of copper screen are positioned about one-fifth of the way up the tube. When the screen is heated in a burner flame and then moved to one side of the flame, it will produce a strong tone at its resonant frequency for several seconds. The standard explanation has to to with the ease of excitation of a system at its resonant frequency. The air which passes up through the red hot screen is heated and expands, producing a pulse of air toward the center of the pipe. Like a push which raises a mass on a spring above its equilibrium position, that pulse of air will start the system into oscillation at its natural frequency. If the copper screen in the tubes needs to be replaced there is extra copper mesh next to the soldering irons at the back of the room. Fold it back on itself 3 or 4 times, cut it to size, and insert it in the tube.