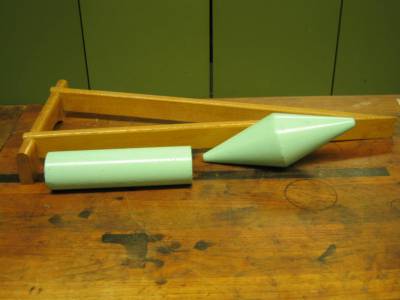 Consists of a wooden v-shaped track set on an incline, and two wooden rollers painted light blue; a cylinder and a double-cone.

Illustrate that rolling downhill isn't really about the slope of the incline, but instead related to the loss of potential energy. In other words, 'downhill' is the direction that decreases the height of the center of mass.

The exact incline of the slope may need to be adjusted a bit to produce the desired effect, particularly if the surface you're showing this on isn't exactly flat.