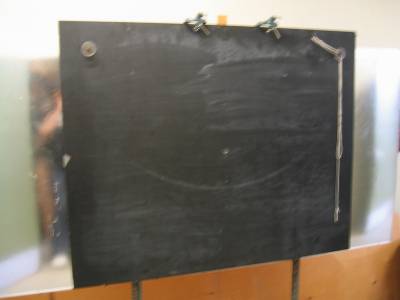 Lami's Theorem that for 3 concurrent forces in equilibrium.

Movable blackboard with attached pulleys, large protractor, selection of weights between 0.5 and 1.5 kg

To calculate an unknown weight, X, using a known weight, P, set up weights and cords as shown and allow the system to settle in equilibrium. Mark in positions of cords on blackboard and use large protractor to measure the required angles. A and B need not be known but can be calculated if desired. If T is the tension in the connecting cross-cord, then: Lami Theorem The calculated value of X can then be compared with its measured weight.