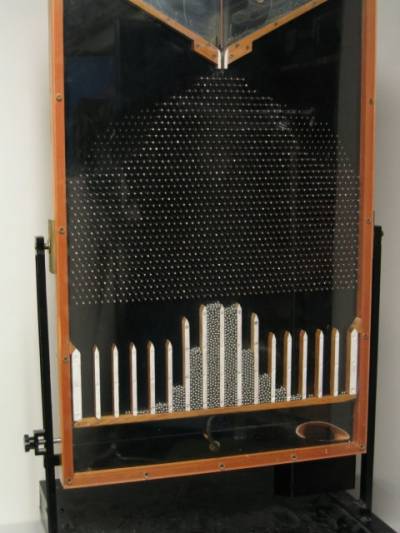 Consists of an apparatus mounted on a black wooden platform. The apparatus is a shallow rectangular box with a plexiglas front. At the top is a funnel-shaped section with a small opening. Below that is a large array of pins placed at regular intervals in a hexagonal pattern. The bottom of the box, below the pins, is divided into 'bins' with a series of vertical wooden walls. Underneath that is a releasable 'floor'.

On the lower left side of the frame holding the machine is a spring pin which holds the orientation of the box at vertical.

To illustrate the occurrence of a Gaussian distribution. Show how analyzing the result of many repetitions of an event can lead to a more nuanced understanding of the behaviour of that event.

At this point, the machine is ready to go. Note that the funnel at the top jams easily- this is solved by turning on the electric 'stirrer'. Plug it into an outlet and flick the switch on the cable. If there's still any jams, knocking on the plexiglas over the jam often helps.

This machine is also known as a 'bean machine', 'Galton Board', or 'Quincunx'.

To explore the statistics behind this machine, I wrote a short python script which I'll include here:

This script outputs the number of simulated balls that land in each bin in order from one side to the other. Graphing it, for large values, produces a bell curve very similar to the one produced by the demo.